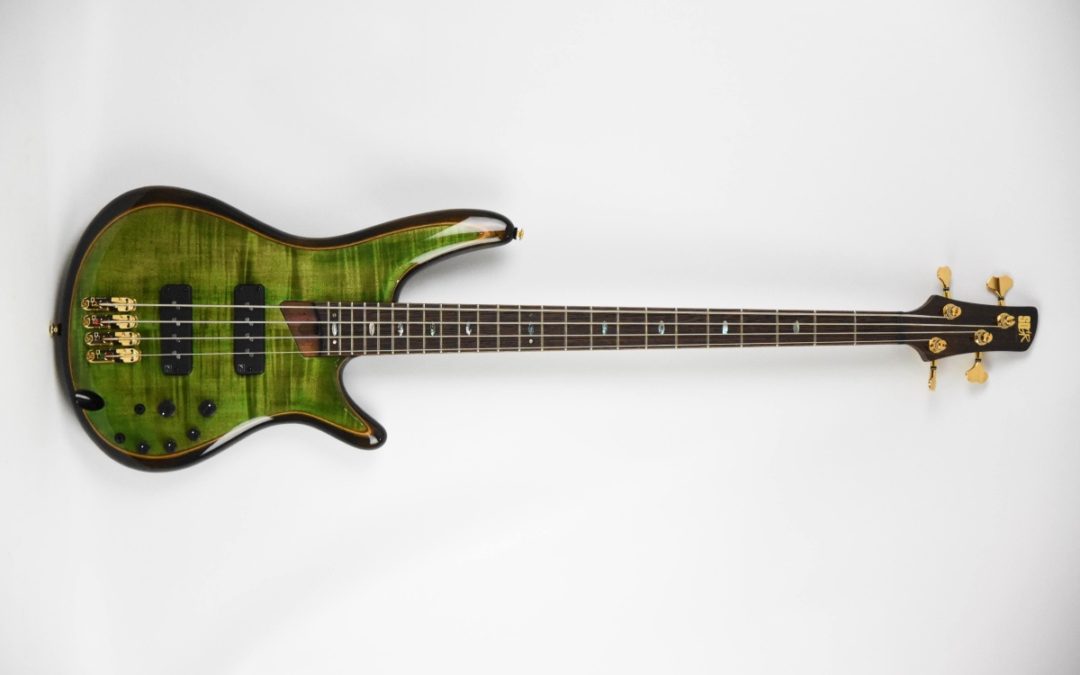 The history of Ibanez dates back to the mid 1930s, when the Hoshino Gakki company (the brand’s owner) decided to launch the production of a Spanish-style acoustic guitar named “Ibanez Salvador” in honor of Spanish luthier Salvador Ibáñez. With time, the name was simplified to Ibanez. Currently, their catalog features about 160 models of bass guitar, some 130 acoustic guitars, and more than 300 electric guitars. The list of Ibanez artists includes the likes of Joe Satriani, Steve Vai, Paul Gilbert, Andy Timmons, as well as bassists such as Gary Willis, Fieldy (Korn), Stephen „Thundercat” Bruner, Adam Blackstone (Eminem, Kanye West, Janet Jackson).

Today, we take a closer look at a bass guitar from the very popular SR series… 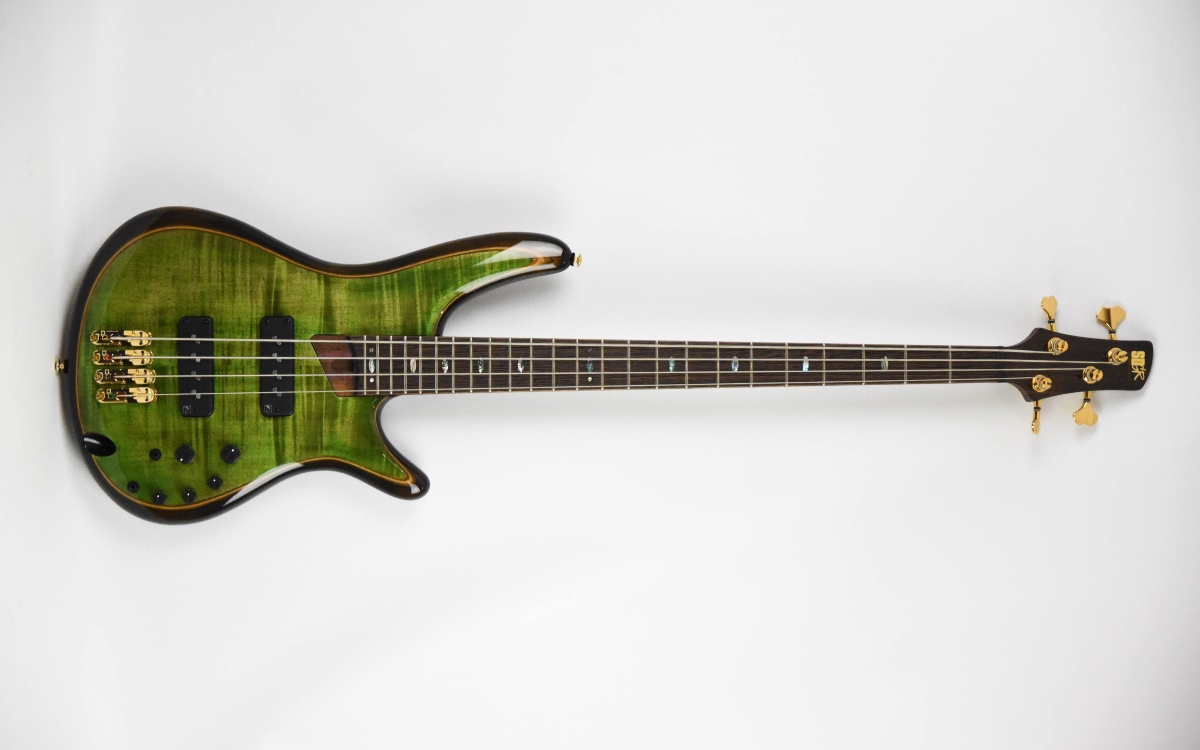 Years ago, Ibanez chose to take their own path as far as the way their instruments’ look goes. In the case of basses, this means an instantly recognizable, one-of-a-kind headstock and body shape, which is so characteristic of the SR line. The body of the instrument being reviewed here is figured green (to be exact, it’s Mojito Lime Green, hence the MLG anagram) turning into brown. The headstock and the rest of the neck is covered with transparent lacquer, which makes wood grains visible. Gold-plated hardware very nicely compliments the highly tasteful look of the instrument.

The body is built from mahogany and covered with a figured maple top. The neck comprises 5 pieces, and is a combination of two kinds of wood: panga panga and purpleheart. The fretboard, which features 24 frets, is made from panga panga and utilizes a sea snail called abalone to make iridescent, oval inlays. The neck and body are held together with the help of four firm bolts. Access to the neck adjusting bolt is very easy – it is just next to the 24th fret. Neck correction is done with the help of a hex key, which is an element of a very nice multi tool that comes with the guitar.

The MR5 mono-rail bridge consists of four bridge rails locked down to the body independently of each other, which maximizes string isolation (19 mm string spacing). The bass guitar is fitted with passive Nordstrand™ Big Single pickups, which feature Alnico magnets and soapbar covers.

The jack socket is partially hidden in the body. The recess could have been finished more scrupulously – the way it was done with the rest of body. However, we do understand such processing would require a separate tool, which would probably have to increase the cost.

Here is what our lab tester, Artur Nowak, has to say:

“I owned an Ibanez bass for over 10 years. It was an early 90s, medium-priced, five-string model. I remember its advantages and disadvantages very well. It was lacking in sound thickness, sometimes sustain. At the time, I attributed that directly to the weight of the instrument, which was only a little over 3 kg. On the other hand, it made the player’s life so much easier (that and the thin, comfortable neck). The pickups were the weak point of that guitar as they were not particularly dynamic and would easily pick up power line interferences. Replacing them with better pickups solved the problem and the instrument bravely dealt with transporting and gigging hardships after that.

The Ibanez 1400 MLG is a fully developed instrument. It offers everything a bass player would need, be it a pro or an amateur. Sometimes even beyond that. We have a sophisticated controls system, which gives lots of possibilities of adjusting the sound to a given music genre or the acoustics of a given venue. The pickups are appropriately sensitive while each of the strings sounds clean, even and selective. As far as the bridge is concerned, I would say using the plural would be more appropriate (remember: four independent rails). It also allows for complete and easy setup, which also translates into sound.

Traditionally for Ibanez, the bass is very comfortable to play. It’s body shape and neck profile makes playing very easy, also in high positions. The sound the instrument provides is still characteristic of the manufacturer, but that should be considered an advantage as switching from a different Ibanez model to this one will not be disappointing. The same goes for a bassist who is simply on the lookout for THAT trademark sound. After getting briefly acquainted with all the knobs, one can easily and to a wide degree adjust the sound to one’s own preferences as well the character of the music one plays.

The instrument looks very nice. The green colour is very much to my liking. The bag is also very nice and practical – padded, with pockets and compartments. I prefer hard cases but there is really nothing to complain about in this department.”

For the purposes of this test, we also used an Ashdown RM 500 Evolution bass head, an Ampeg cabinet, Ernie Ball Hybrid Slinky strings as well as Ernie Ball cables. We give you the Ibanez 1400 MLG bass guitar!