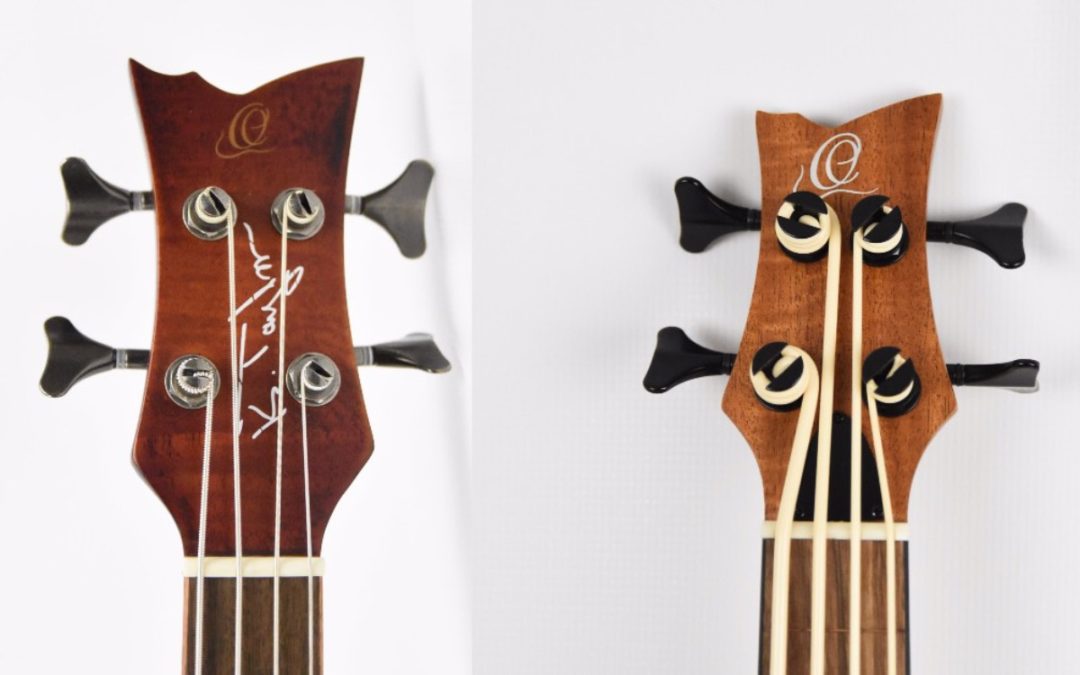 As part of our continuous gear testing process, we are taking a closer look at two bass ukuleles (in fact, one of them is a baritone instrument) sent to us by Ortega Guitars – a company which celebrates its 25th anniversary this year. Those instruments are:

The way the two instruments look is simply marvelous. Even if hanged on a wall in a living-room or a studio control booth, they would make a wonderful embellishment. In the case of the LIZZY-BSFL-GB, it is mahogany with the soundhole surrounded by little lasered lizards. Beautiful! As far as the KT-Walker-V2 is concerned, what catches the eye is the gorgeous texture and natural colour of spruce (top) and flamed mahogany (back) as well as very stylish pearl inlays on the fretboard made from Pau Ferro wood, which is found in tropical forests of Brazil and Bolivia. A real beauty!

Both ukuleles are made in such a way that they can safely be treated as studio and concert instruments, i. e. the tuning pegs hold the strings firmly, the tuners, preamps and equalizers work properly. We haven’t noticed any noise that could disqualify them in studio or live. Both ‘baby basses’ are electro acoustic instruments so mic and pickup sounds can be mixed, which is an additional asset broadening the scope of options they offer.

From the point of view of luthier’s work, we see absolutely no problems such as lower dynamics on some frets, problems with tuning, difficulties pressing the strings to the frets correctly or producing accurately pitched sounds when the instrument is tuned properly. In other words, there is nothing that would inhibit a player. Sadly, we have no experience with other instruments of this kind, but life is not over for us yet 🙂

String tension on both ukuleles is very easy on a player’s fingers – it gives an impression of softness and playing ease. It is worth noting from the point of view of the next issue, which is…

It will happen at times that a young person whose hands are not yet fully developed gives up playing bass when confronted with a full-sized, 34-inch-scale instrument due to difficulties playing at the lowest positions of the fretboard. Such a ukulele will surely make life a lot easier for a kid who has just started his or her adventure with the bass guitar as it has all the features of a full-sized instrument that need to be mastered (tuning, proper pressing down on the strings, etc.) while playing it easier thanks to a shorter scale. We will even go as far as saying that a music school which has very young bass entrants should equip itself with such a bass ukulele to prevent learners from being discouraged from playing standard-sized bass guitars for anatomical reasons.

Other applications which come to mind include practicing at home, playing with a guitarist or band acoustically, and becoming a member of a ukulele orchestra.

We like the electronics on both ukuleles. Having plugged them to an amp at a standard volume, we could hear no noises which would spoil us the fun of playing these instruments. The sophisticated equalizers work efficiently, and the tuners featuring the MUTE function (allowing for silent tuning) built into the preamps didn’t cause us any difficulties, which means they have been selected according to the nature of the bass ukulele.

Here is what our lab tester, Artur Nowak, has to say:

“I’ve never owned or even played a ukulele. A few years ago, if somebody had suggested playing one properly, I would have laughed them out. However, BeatIt’s proposal to test two such instruments gave me some food for thought. I quickly realized that despite the small size and the initial impression of dealing with a toy, the ukulele (standard one or bass) should be treated as a fully fledged musical instrument. As fas as the bass ukulele is concerned, I would say that in many cases it is an interesting alternative for laying down the bass for a band.

The first thing that struck me in the Lizzy BSFL-GB was the soft and nicely fat sound. Harnessing a small, short-scaled neck as well as strings which reminded me of thick pasta strings does obviously take some time because a player’s fingers have to adjust to the specific of the strings and a 20-inch scale in order to produce appropriate sounds. And it’s a fretless to boot… Naturally, what that requires is extra diligence as well as increased subtlety compared to steel strings when producing notes, which is absolutely feasible after a period of adaptation. This ukulele is is an instrument which broadens a player’s musical and performance possibilities, which is why it can easily be treated as a serious alternative to a fretless bass guitar. It sounds soft and warm. The fact that it is light, small, practical and convenient is also worth mentioning. Although it should be taken into consideration that the Ortega Lizzy BSFL-GB won’t allow anybody to achieve a hard and aggressive sound simply because it wasn’t built for that. It’s good to be aware of that fact.”

“The KT-Walker-V2 is much more similar to acoustic bass guitars with a standard scale, although it still sounds a bit different because we’re still dealing with a scale that is shorter than a regular bass. For this reason, it also requires a certain adjustment from players. As opposed to its smaller brother, this one is a fretted instrument, which makes producing the right notes easier than on the ‘Lizzy’. In addition to the nylon cores, the strings are also soft-metal wound, which shifts their sound characteristics towards the harder end of the spectrum, although still very warm. I myself prefer fretted basses (or have preferred until now 😉 ), which is why this one is more to my liking. I could certainly find applications for it in my musical projects.”

We should also mention that the Ortega KT-Walker-V2 bears the signature of Ken Walker, who plays bass for Peter Maffay – one of the biggest stars in the history of the German music industry (over 40 million albums sold, 14 #1 albums on the German charts, EACH of his studio albums reached top 10). This ukulele model is connected to charity projects. A percentage of each KT-WALKER-V2 sold will be donated to a charity chosen by Ken.

For the purposes of this test, we also used an Ashdown RM 500 Evolution bass head, an Ampeg cabinet as well as Ernie Ball cables. We give you the Ortega Lizzy BSFL-GB and Ortega KT-Walker-V2 bass ukuleles!